Leading University Experts have analysed the DNA from over 2,000 individuals whose grandparents all lived in the same part of the UK. The aim was to provide a fine scale genetic picture of the People of the British Isles whilst understanding how each individuals DNA relates to the rest of the world.

The scientifically validated and published results confirm what many Anthropologists and Historians know; there is no such thing as a separate United Kingdom.

In fact the DNA of every single individual in the UK study can be traced back to different parts of Europe, and further afield.

In the diagram below you can see how each of the areas of the UK, symbolised by a pie chart, are made up of different populations. Whilst the percentages of the pie chart vary, they all originate from other parts of Europe (shown on by the bar charts on the left). 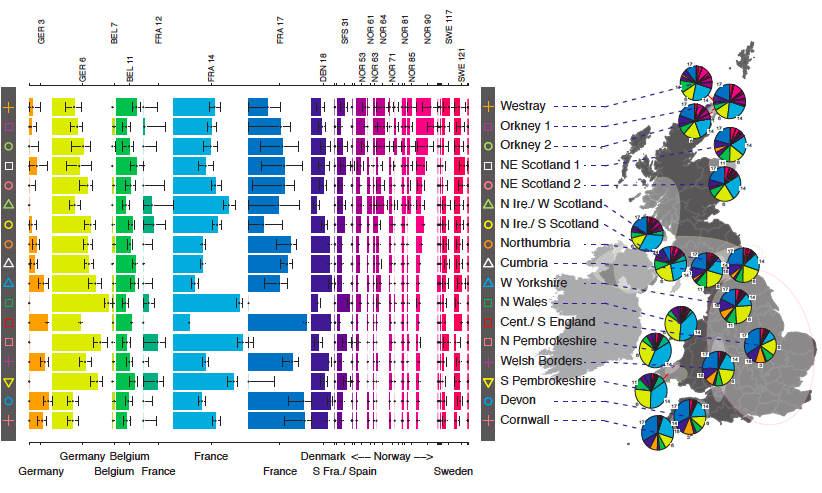 The diagram visualises how in each part of the UK individuals can link their ancestry back to parts of Europe, albeit at different percentages which has been based on the great migrations and invasions of history.

The greatest genetic influence in the study comes from Germany and France, which is no surprise to linguists given that the English language is Germanic in origin.

If we take another look at the same data, this time from a European perspective, we get to understand that no country, particularly the United Kingdom, stands alone as each country is connected to each other. 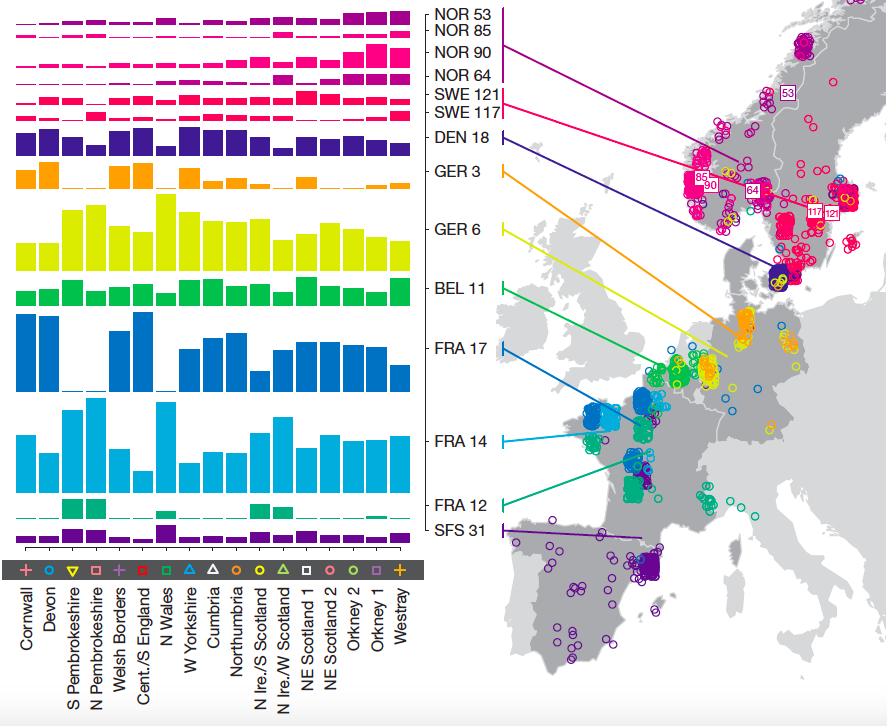 Each column on the table to the left of the map shows a population cluster, the coloured bars and their heights represent the proportion of ancestry from different European groups. Please note only groups that show a contribution of more than 2.5% have been included.

The DNA results confirm that fact that we are All Made Up of All of Us. Individuals who once thought themselves to be “British” can now appreciate the fact their ancestors are spread far and wide around the world.  We can clearly see there is no such thing as a separate United Kingdom.

Something many of us also forget is that The United Kingdom was only inhabited after the last ice age, which was not that long ago. This means that everyone in the UK is a migrant, some who moved here themselves and others who’s ancestors settled years ago.

Furthermore the diagram below shows that in 8,000 BC the United Kingdom and Europe were connected as one large land mass. Back then England, Scotland and Wales were not separated by water and you could freely walk on land to Germany without getting your feet wet. 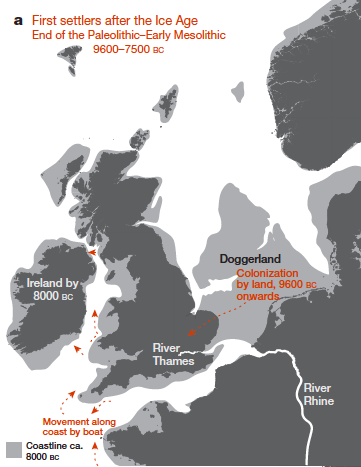 Given the earth is millions of years old, 8,000BC is considered very recent history. It is also far more recent than the time when individuals migrated and settled in America.

With the looming referendum looking at leaving or remaining in the EU, it’s worth taking a moment to listen to our genetics and history, which clearly shows we are one. One with Europe and one with the world.

Information and images are from "The fine-scale genetic structure of the British population”  which was published in Nature on the 18th March 2015.